Robotic handler used in moving objects. This device is highly flexible as it combines a manipulator to two latest generation robotic arms, via an adaptive end-effector and an end-effector with an implemented conveyor belt. The flexibility of the system allows it to be used on a large number of packages of various shapes and sizes, in contrast to the rigidity of existing systems, taking inspiration from the way in which human operators perform this type of tasks. 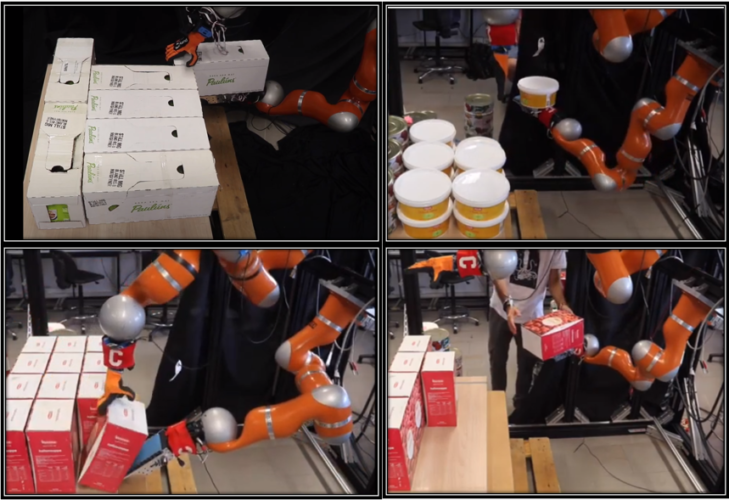 The device consists of one or more collaborative robotic arms (co-bots) with gripping appendages capable of picking up objects of different sizes, shapes and weights. When using a single arm, a gripping system capable of passively adapting to the shape of the object was implemented. However, when using two arms, the second arm uses an end-effector and assists the first arm by supporting the object picked up. The developed device can be moved by a control unit, and to increase the working space of the gripping system, it was mounted on an autonomous mobile base. The system was integrated with a vision system for the recognition of objects and their position. To the author’s knowledge, there are no devices, on the market, able to work without human intervention, except for specific devices for single product type. Existing systems foresee the identification of a work area within which personnel cannot be present during machine operations for safety reasons.