The present invention relates to a method for improving enhanced physical and chemical proprieties of 3-iodopropynyl butylcarbamate (IPBC) through its co-crystalisation with other molecules. IPBC is a biocide, largely used as preservative, fungicide and inhibitor against algae proliferation in industrial formulations such as paints, coatings and wood preservative formulations. 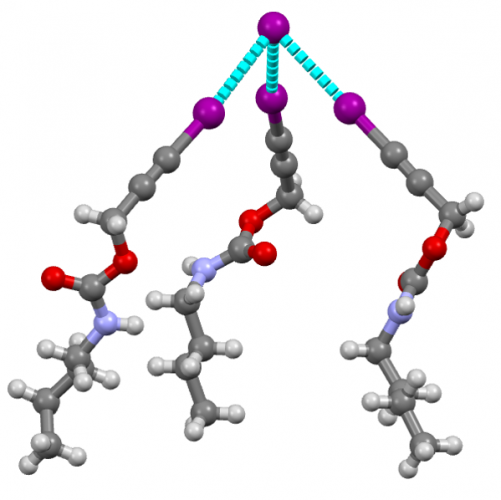 In the case of IPBC, the co-crystals can be formed by a supramolecular approach involving the assembly of IPBC with selected chemical species called co-crystal formers, which are able to establish non-covalent interactions involving the iodine atom (halogen bond, XB) present in the molecular structure of IPBC. The co-crystal formers used in the invention are: organic bases, in particular aliphatic amines or aromatic heterocyclic derivatives containing at least one basic nitrogen atom; halides; phosphates; and carboxylates. Independently to the method used, the obtained co-crystals have different physical and chemical properties compared to the original compound, without altering the biological activity of the active pharmaceutical ingredient. The co-crystals are more performing than the pure IPBC molecule even when used to prepare formulations such as solutions, emulsions, suspensions, powders, foams, pastes, granules, tablets and inhalers, or microencapsulated in polymers.