Medulloblastoma (MB), tumor of the cerebellum, is a leading cause of cancer related mortality in children. In a mouse model of spontaneous MB, correlation between a defect of the migration of cerebellar precursor cells (GCPs) and an increased frequency of MB was demonstrated. The chemokine Cxcl3, responsible for the inward migration of GCPs, has been show to suppress the development of the MB lesions. 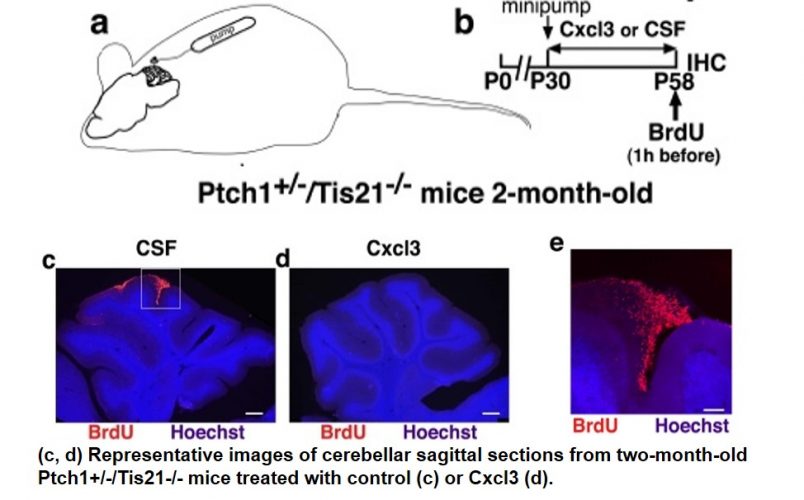 Medulloblastoma (MB) is the most common brain cancer that occurs during childhood, which represents about 20% of all paediatric primary CNS cancers. In the mouse model of spontaneous MB, Ptch1+/-/Tis21-/-, a dramatic increase of MB frequency is caused by an impairment of migration of granule precursor cells (GCPs) from the surface of cerebellum to the internal layers, during cerebellar development. The inventors demonstrated that this increase in MB occurs because GCPs stay longer in the proliferative area rather than differentiate and migrate internally, becoming potential targets for neoplastic transformation. The chemokine Cxcl3 is responsible for the inward migration of GCPs and research demonstrated that the addition of exogenous Cxcl3 to cerebellar slices rescues the defective migration of GCPs. Notably, the chronic administration (for 4 weeks) of the chemokine Cxcl3 into the cerebella of the 1-month-old Ptch1+/-/Tis21-/- mice suppresses the development of MB lesions.