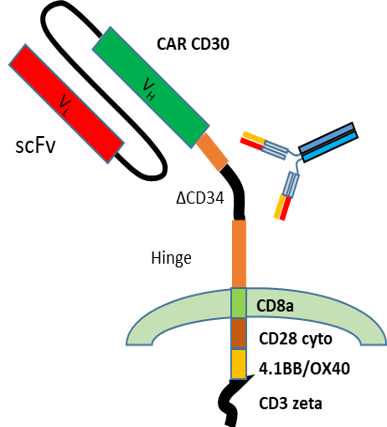 The present invention relates to a vector comprising the nucleotide sequence which encodes the sequence SFG.CAR.CD30(AC10)ΔCD34.CD8aTM.CD28cyto.OX40.ζ, wherein said vector is a DNA vector, an RNA vector, a plasmid, a lentiviral vector, an adenoviral vector, a retroviral or a non-viral vector. The present invention relates to a cell, such as a T cell, such as an alpha / beta and gamma / delta T cell, NK cells, NK-T cells, comprising the aforementioned vector or plasmid. The above-mentioned cell is obtained in the presence of recombinant human IL2, or with a combination of IL-7 and IL-15. The use of the invention in the treatment of CD30 + tumors: such as lymphomas (HL/NHL), sarcomas, embryonic carcinomas, adenocarcinomas, mesotheliomas, mixed germ cell tumors, non-seminomas, head and neck carcinomas, yolk sac tumors, angiosarcomas, pituitary adenomas, dysgerminomas, teratomas or seminomas.