A process and an apparatus for the plenotic acquisition of images called “plenotic imaging between arbitrary planes”, based on the measurement of the spatio-temporal correlations of light. Light coming from the scene of interest is divided into at least two distinct beams, each one reproducing on a separate sensor the image of a specific plane within the 3D scene of interest. By measuring the intensity correlations between the two sensors, it is possible to reconstruct the direction of light propagation between the two chosen planes, so as to be able to increase the depth of field of the acquired images, modify their focus plane, the retrospect, and reconstruct the 3D image of the scene, maintaining the maximum resolution allowed by the optical system. 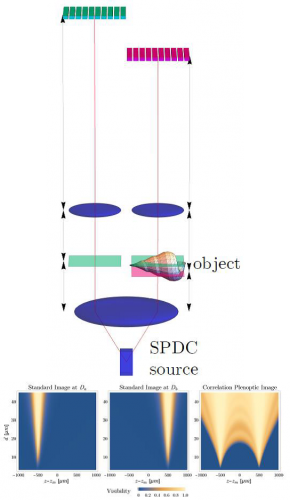 The invention is based on the concept of “Correlation Plenoptic Imaging” (CPI), a method of creating plenotic images based on the measurement of the spatio-temporal correlations of light, and characterised by the possibility of combining the maximum possible resolutions (defined by the numerical aperture of the optical system) with a depth of field not otherwise accessible. In this device, two separate sensors provide images of two different planes contained in the 3D scene of interest. The measurement of the space-time correlations between the intensities revealed by the two sensors allows to reconstruct the direction of light propagation and to obtain the typical features of plenotic imaging (refocusing of images, increase of depth of field, 3D reconstruction of the scene). Compared to the already patented CPI devices, the current device allows to further widen the maximum depth of field obtainable, safeguarding the maximum resolution.