Actual carbonation depth measuring methods comply with the EN 13295 standard and consists in taking samples of the material to be examined and sprinkling their exposed surface with Phenolphthalein, which will turn red-fuchsia in the non-carbonated areas. However, the transition between the two areas is not clear-cut, so it is up to the subjectivity of the operator to establish the transition perimeter. This leads to poor repeatability of the measurement between different operators. In addition, some types of agglomerates do not color anyway, and should not be considered as a carbonated area when taking measurements. 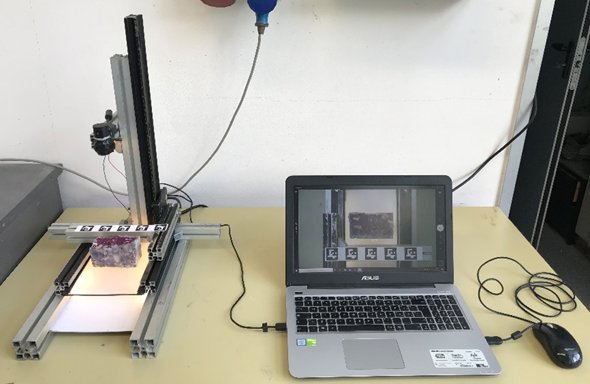 The invention in made up a support with constant LED lighting (5) on which the sample coated with phenolphthalein (4) is housed. The stand also holds a high quality camera (1), plus adjustable markers (3) to be positioned at the same elevation as the sample section. The camera simultaneously frames the section and the markers, which are used to give a certain and objective reference to the scale of the sample. An algorithm based on convolutional networks determines the measurement perimeter by independently and objectively identifying the transition between carbonated and non-carbonated area, it recognizes and does not consider any agglomerations that would give false measurements, then proceeds to average the measurements on all points of the perimeter, with reduced computational consumption. The carbonation depth is returned in terms of average value (ratio between the area and the perimeter of the carbonated area) and maximum (maximum distance between the specimen outer perimeter and non-carbonated area). Consequently, the depth measurement is even more accurate than following EN13295 standard method.

Environment and Constructions - Architecture and Design