Exoskeletons that assist the upper limbs (e.g., hands), are wearable devices that provide for an actuation system suitable of generating a force to be transmitted to the fingers, in order to allow the closing or opening of the hand. However, among the known solutions, one of the main issues resides in the actuation of such devices. In fact, if all degrees of freedom of the hand are actively assisted via the exoskeleton, to provide a full range of motion, the number of actuators and the mechanical complexity of the device increases radically. “Underactuated” exoskeletons are a proposed solution, designed to overcome the aforementioned limitations. These allow for a bidirectional force to be applied to each finger of the hand, thus supporting and allowing the extension and flexion of the same. 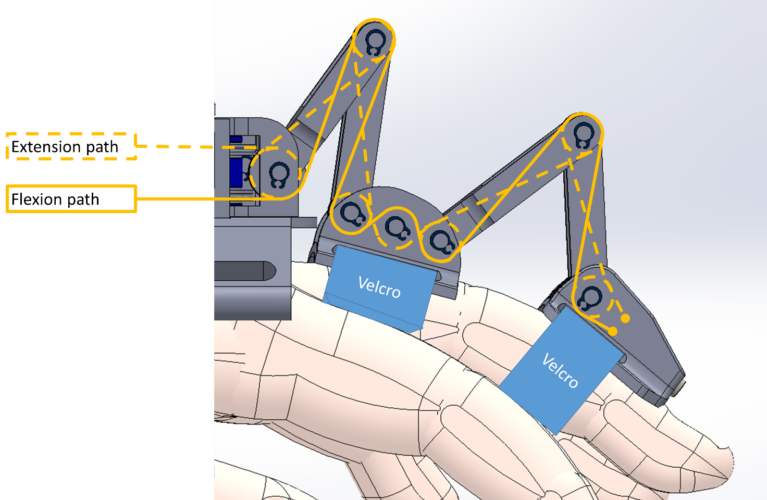 Presented is a wearable, exoskeleton, actuation device for the assisted movement of the fingers of a user’s hand, comprising of a supporting platform, intended to be positioned on the back of the hand, easily removable thanks the fixtures which keep it in place. The device consists of at least an articulated first finger module, connected at one end to the supporting platform and the other to a finger of the hand for guiding a movement of flexion or extension. Included is a motor able to generate a rotational motion in two opposite directions, to allow a higher degree of movement.