BACTERIAL FORMULATION TO BIOFERTILIZE PLANTULES IN PROTECTED CROPS, SEEDBEDS AND IN VITRO

Process for the production of micropropagated seedlings treated with microorganisms able to exert phytostimulant and biocontrol activities such as to favour a better condition of the plants propagated in vitro and subsequently their better adaptation to the cultivation conditions in vivo.
Numerous microorganisms beneficial to plants (Agrobacterium, Azotobacter, Bacillus, Erwinia, Pseudomonas, Rhizobium, Bradyrhizobium, Streptomyces, Actinomyces, and Azospìrìllum) are known to be growth promoters and/or biocontrol agents. Their use in the production of micropropagated plants is innovative, considering that in vitro propagation requires aseptic conditions. 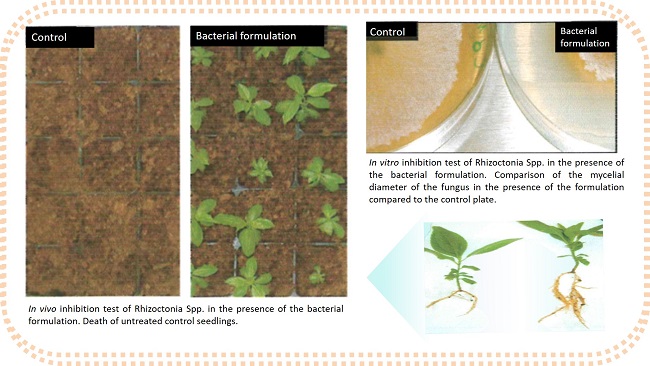 Bacterial formulation, based on Azospirillum brasilense, used to multiply healthy, genetically uniform plants in large quantities. The formulation consists of gram-negative bacteria, which live in the rhizosphere of many plants and positively influence their growth, especially the root system, through the production of plant hormone-like substances (cytokinins, auxins and gibberellins) and processes such as the fixation of atmospheric nitrogen, thus making it assimilable by the plant. The method is very useful in cloning genetically improved species that can be used to increase agricultural and forestry productivity. It can be used for propagation applications in: in vitro procedures, including the subsequent acclimatisation phase (post vitro), in seedbeds, in protected cultures, in hydroponics, with nursery techniques in general. The application of microorganisms in a controlled manner, following the proposed methodology, can usefully counteract the problems of micropropagation, guaranteeing a) the obtainment of more vigorous plants and greater protection from pathogen attack in the subsequent growth phases, b) significant increases in biomass and the reduction of traditional fertilisers.