The invention provides new effective compounds with therapeutic action against breast cancer (BC) cells and in particular, against its most aggressive forms (triple-negative breast cancer – TNBCs). The antitumor efficacy of some compounds of the invention was evaluated by in vitro tests conducted on three breast tumor cell lines: MCF-7, MDA-MB-231 and MDA-MB-468. 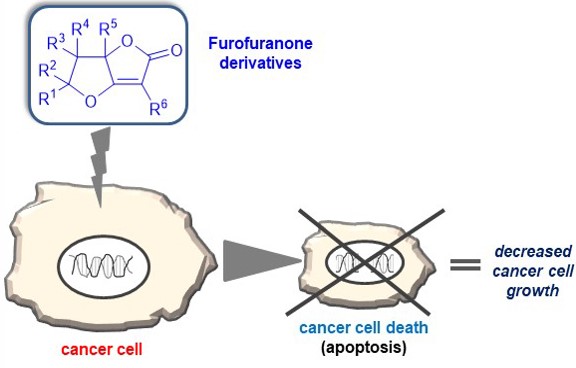 The dihydrofurofuranone derivatives were obtained in one step, starting from simple substrates (4-yne-1,3-diols, carbon monoxide, and  oxygen), under the catalytic action of PdI2 in conjunction with an excess of potassium iodide (KI). The dihydrofurofuranones thus synthesized have significant antiproliferative activity in vitro on human breast adenocarcinoma cell lines, both hormone receptor positive (MCF-7) and triple negative (triple-negative breast cancer [TNBC]; MDA-MB-231 and MDAMB-468), while exhibiting practically no effects on normal MCF-10A (human mammary epithelial) and 3T3-L1 (murine fibroblasts) cells. Thus, these compounds have the potential to expand the therapeutic options against BC, and in particular, against its most aggressive forms (TNBCs).