Device capable of producing electricity using two forms of energy, solar and chemical, separately or simultaneously. The invention, having a parallelepiped shape, made of material with high thermal conductivity, has two or more swirling combustion chambers inside. 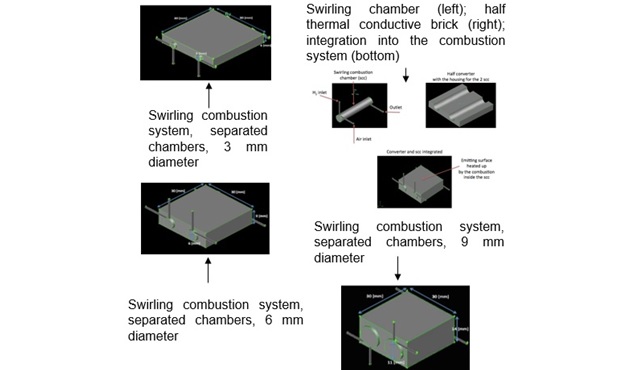 The converter, thanks to the high conductivity material with which it is made, transfers the heat absorbed by the sun, from the upper face (sun face) to the lower face (emitting surface), raising the temperature up to values , enough to have sufficiently high heat flows to be able to be converted into electricity through photovoltaic or thermoelectric systems. When the level of solar energy is lowered, beyond a given value, it can be integrated or replaced by using the heat generated by the hot products of combustion, which took place in the swirling chambers, and transferred to the external surface by thermal conductivity. It is added that the internal surface of the combustion chamber, heated by solar energy, can function as an “igniter” of the fuel-oxidant mixture. The system has the absorbing and emitting surfaces of fixed dimensions 30×30 mm, while the chambers have a fixed length of 33 mm and the diameter in the range of 3-11 mm, with separate or connected configuration. The total thickness varies, according to the diameter, from 6 to 14 mm. The solar module was built, the combustion chambers and their integration with the module were numerically simulated. It takes 12 months for prototyping and placement.