AeroSwitch is a system which exploits distributed electric propulsion in order to design a Multi-Engine light aircraft capable of simulating the behaviour of a Single-Engine aircraft during the flight. Such versatility allows multiple training scenarios using the same vehicle, with a drastic impact on operating costs, and ensuring a higher safety and environmental sustainability (chemical and acoustic emissions), compared to existing aircrafts. 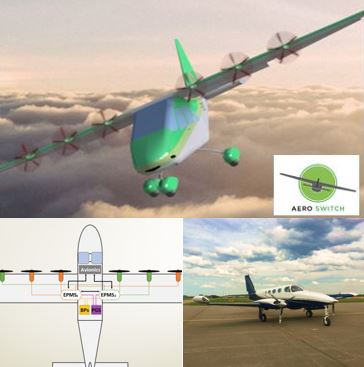 AeroSwitch is a system developed to meet the needs of Flight Schools to train pilots on Single-Engine and Multiple-Engine aircrafts. Exploiting the architecture with multiple propulsive electric engines and a dedicated control system, AeroSwitch eliminates the Single-Engine / Multi-Engine dualism, solving the safety issues related to the use of a Single-Engine and allowing the use of one aircraft model for all training curricula.

AeroSwitch is based on two operating modes: simulated Single-Engine or Multi-Engine. In the first case, the pilot is led to act as on a conventional Single-Engine, even during emergency situations, as the system is able to emulate the typical response. The Multi-Engine configuration, on the other hand, allows the pilots to be trained to manage different scenarios of propulsive failures.