Adjuvants of polymyxins against antibiotic-resistant bacteria

Compounds 4,5-dihydro-5-keto-7-hydroxy-2-methyl-2H-pyrazole [4,3-b] pyridine-6-carboxamides, their salts, derivatives and pharmaceutically acceptable excipients, with direct antibacterial activity or in synergy with at least a second antibiotic compound, against Gram positive and Gram negative bacteria sensitive or resistant to conventional antibiotic therapies. In fact, in clinically relevant pathogenic bacteria, both Gram-positive and Gram-negative, “multi-drug” or even “pan-drug” resistance is rapidly emerging, i.e. resistance to almost all classes of antibiotics available (eg. beta-lactams, quinolones, tetracyclines, glycopeptides and macrolides). The pyrazole [4,3-b] pyridine-6-carboxy amide derivatives in question show direct antibacterial activity against Gram-positive bacteria such as Bacillus subtilis, Enterococcus faecalis, Streptococcus pyogenes and Staphylococcus aureus, as well as a synergistic antibacterial activity with polymyxins, such as polymyxin E1, against Gram-negative bacteria such as Acinetobacter baumanii. 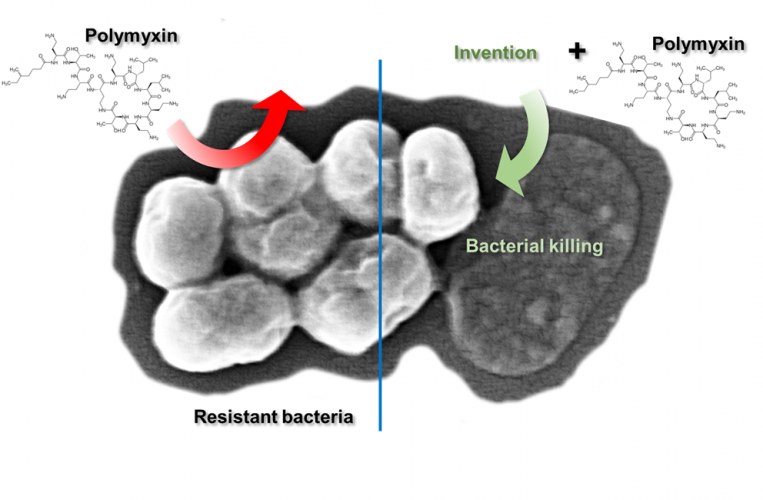 These can be administered topically, enteral, oral, parenteral, intranasal, intravenous, intra-arterial, intramuscular, intravesical, intraurethral, ​​subcutaneous or intraocular, or the like. They can be formulated to allow immediate release or a release over time of the active ingredient. The compounds show synergistic antibacterial activity especially on Gram-negative bacteria, in particular with antibiotics of the polymyxin class, such as polymyxin E1 (colistin). The use of one of these adjuvants together with colistin allows: a) to overcome bacterial resistance to colistin, and b) to reduce the dose of colistin well below that responsible for cytotoxic effects or systemic toxicity. The synergistic activity shown by the new adjuvants allows to re-evaluate the clinical use of polymyxin E1 in the treatment of infections due to bacteria sensitive or resistant to this antibiotic – but not treatable with other antibacterials – while reducing the risk of serious toxic effects ( e.g. nephrotoxicity) resulting from the use of usually necessary doses of polymyxin E1.