ADAM10 ACTIVATOR PEPTIDE FOR THE TREATMENT OF ALZHEIMER’S

We planned a therapeutic approach to restore ADAM10 synaptic availability in Alzheimer’s Disease (AD). We identified the actin-binding protein CAP2 as a novel ADAM10 partner involved in its endocytosis process. The increased association of CAP2 to actin in AD affects ADAM10 endocytosis and its synaptic levels. We developed a cell permeable peptide (CPP) able to interfere with CAP2/actin association and, thereby, to restore ADAM10 membrane levels/synaptic activity, eventually limiting Aβ production. 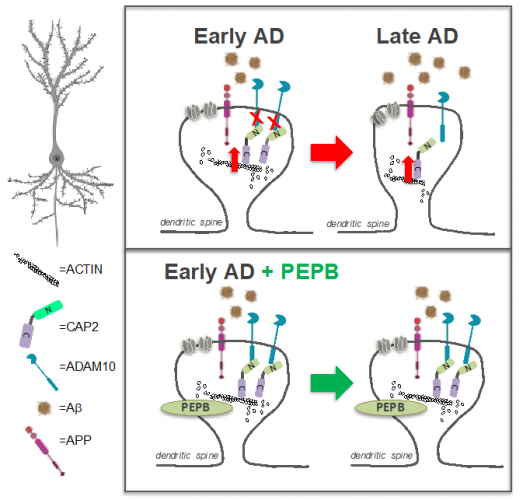 CAP2 is a multidomain actin-binding protein able to bind ADAM10 cytoplasmic tail. We found that the lack of CAP2 association to actin impairs ADAM10 endocytosis and, thereby, increases the synaptic localization of ADAM10. Overall, these data confirm that CAP2 is a novel binding partner of ADAM10, capable of regulating its synaptic localization and, thereby, its activity. In AD patients and animal models CAP2 association to actin is increased and leads to a reduced ADAM10 synaptic availability. Our peptide targets this pathological alteration: it interferes with CAP2/actin binding to restore ADAM10 physiological trafficking and synaptic levels. The administration of the peptide to an AD mouse model (APP/PS1 mice)  significantly reduced the levels of Aβ and increased the release of sAPPα. Moreover, it restores the spine loss and rescues the impaired cognitive function in APP/PS1 mice as shown by behavioural tests, without causing any toxic side effect.