The patent describes a sequence of synthetic DNA that, when introduced into cells derived from patients affected by type III glycogenosis (GSDIII, a rare genetic disease) by physical (electroporation) or chemical methods, is able to express an active Glycogen Debranching Enzyme (GDE), the missing function in such patients. The recombinant GDE protein has also been produced and purified in active form from bacterial cells and is very stable. 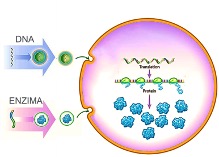 To date, there are no targeted therapies for most Glycogen storage disease (GSD) types, a group of rare metabolic diseases due to alterations of enzymes involved in the metabolism / degradation of glycogen, a glucose polymer. For some rare genetic diseases, including type II glycogenosis, enzyme replacement therapies (ERT) or, more recently, viral vector-mediated gene therapies are available. However, some problems associated with these systems (poor safety, high costs), are pushing gene therapy towards non-viral methods, which show advantages such as: reduced immunogenicity, greater ability to accomodate large genes, reduced costs and repeatable treatments over time. This patent has shown for the first time that a synthetic gene encoding the human GDE protein, inserted into a plasmid and delivered by chemical or physical methods (e.g. electroporation, EP) into cells derived from patients affected by type 3 Glycogen storage disease (GSDIII), is able to sustain high expression levels of GDE in an enzymatically active form.