The invention relates to a 3D radiation detector, designed using a hydrogenated amorphous silicon substrate. Such geometry allows  ane increased charge collection compared with the planar technologies currently used for this kind of detector and at the same time the reduction of noise, making it suitable for detecting particles or single X photon. One of the main features of this detector is its high resistance to radiation damage. 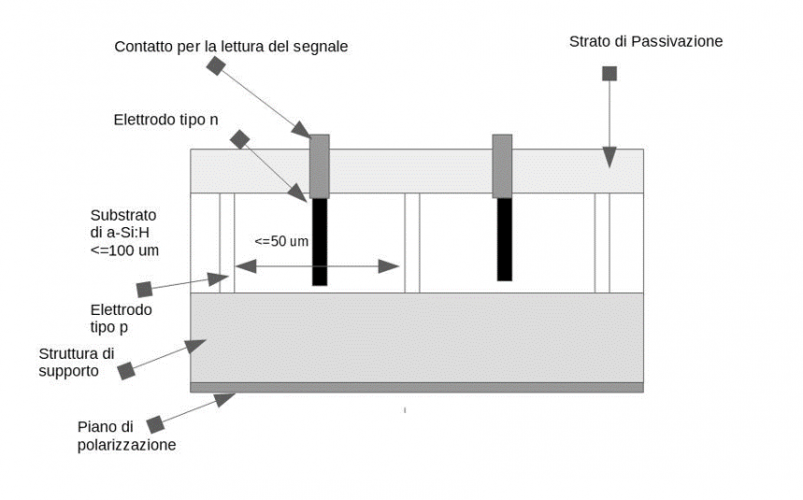 The adoption, for the hydrogenated amorphous silicon detector, of a 3D geometry, instead of the classical planar configuration, allows the improvement of the device performance in terms of signal detection. To provide a high-performance detector it is necessary to increase the signal collection and/or reduce the noise. The 3D geometry and the presence of collection electrodes spaced at suitable distance, in the hydrogenated amorphous silicon substrate allow a more efficient collection of the charge signal developed along the thickness of the substrate itself. These facts make the device usable as both a particle and a single photon detector. Another fundamental advantage of the detector is its high resistance to radiation (exposure up to 7*1015 part/cm2),  which makes it applicable both for research purposes, in the context of future hadronic accelerators, and in the medical and industrial field, for X-ray imaging and particle beam monitors.