The present invention describes compounds, in particular ω-3 series polyunsaturated fatty acids, for the prevention and treatment of male infertility, due to azoospermia with chemo-radiotherapy treatments in pre-pubescent subjects, in which cryopreservation cannot be carried out. 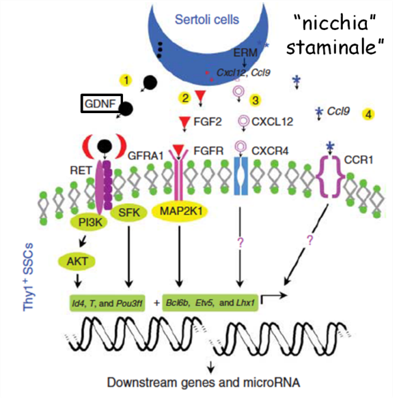 Recent advances in chemo and radiotherapy fields have significantly increased the survival rate of children, adolescents and young men suffering from neoplastic pathologies and serious inflammatory diseases of autoimmune aetiology, with a mortality rate that has steadily decreased 2.1%/year since 1975 (Howlader N. et al., 2013); however, compared to the increase in survival of patients treated (at least 3 out of 4) with the new chemotherapy therapies, a significant increase in sub-fertile or infertile subjects was observed in adulthood. This invention includes the use of eicosapentaenoic acid (EPA) in the preservation of male infertility in pre-pubescent subjects undergoing chemo /radiotherapy treatments for neoplasms, where EPA acts as a modulator of the glial neurotrophic factor (GDNF) sertolian. The invention could also includes the use of EPA with one or more antioxidant agents, such as vitamin E, vitamin C, beta-carotene, N-acetyl-cysteine, alpha-lipoic acid, carnitine, folic acid, lycopene, selenium, coenzyme Q-10 or zinc, for separate or sequential use in the treatment and/or prevention of male infertility following chemo/radiotherapy treatments performed for prepubertal neoplasms.