Innovation For Change 2016 – The winners

Aquasmart, an intelligent and integrated to the water supply system to facilitate the identification of water losses and intervene in a timely manner, is the winner of the 2016 project “Innovation for Change” initiative, promoted by the SAFMA (School of Advanced Training for Management) the Politecnico di Torino and Ideasquare, an experimental center specializing in innovation at CERN in Geneva.

The project involved 50 young students and researchers, post-graduate level and with a scientific-engineering education, which over the last five months have been working in Geneva and Turin, divided into several groups but united by the same goal: to apply the most advanced technologies to help solve problems of social interest.

The students were led by researchers at CERN and the Polytechnic University to discover tools and cutting-edge technological solutions and have been called to design prototypes of innovative products or services, which at the end of the test phase, expected to be introduced on the market, providing the basis for starting new businesses.

During the final day of the project at the Castello del Valentino students presented the results of their work to an audience of companies and investors, and the jury that determined the winner, composed of eminent personalities of the institutions involved: Fabiola Gianotti – Director of CERN, John Elkann – Vice President of the Fondazione Giovanni Agnelli, Francesco Profumo – President SAFM, Marco Gilli – Rector of Politecnico di Torino. 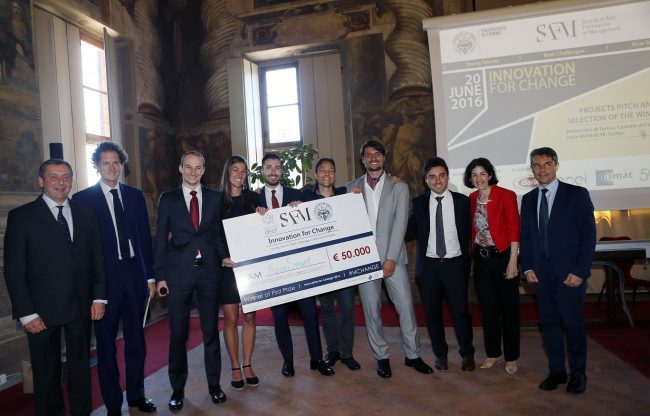 The winning team, AquaSmart, will receive a special contribution of 50,000 euro, allocated by the Agnelli Foundation as part of the celebrations for its 50th anniversary. The contribution is intended to support the working group Aquasmart to constitute a real start-up, beginning to operate on the market.

Besides AquaSmart, the jury also selected:

– Demeter, an automated system for managing resources for the agricultural sector;

– Alfie, a solution for the building to be applied on building facades, based on a vertical form composed of algae which allows the reuse of water in urban areas.

The three winning teams will have the opportunity to participate for free at the European Innovation Academy (EIA), the international acceleration program for start-up technology that will be 10 to 29 July by the Politecnico di Torino: the event will participate partners like Google, Allianz, FCA, Intesa Sanpaolo and Ferrero, and will arrive in the city of Silicon Valley mentors and 300 students from the best universities around the world.